Unexpected Shutdown: How it Affects your Computer 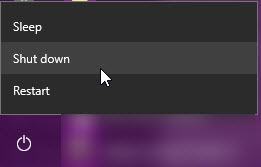 An unexpected shutdown can potentially harm your computer, which is why it is important to properly turn off your computer by going to the power options and selecting “shut down,” “restart,” or “sleep.” This allows the computer to make sure that any running programs are closed.

If apps are still running, a notice will allow you to go in and save your work and close them properly, or you can “shut down anyway.” To avoid losing files or corrupting a program, it is best to “cancel” the shut down and go back and close the programs properly.

How an Unexpected Shutdown Affects your Computer

Even if you don’t have any programs running, there are other processes going on the background. Registry files that may still be performing operations in the background, which, if uncompleted, can damage the registry. This is the database that stores system configuration for software installed on the computer. If it becomes corrupted, a technician may need to repair the files or even reinstall the entire operating system (Windows).

When a computer is performing an update, it is adding to or changing files in the registry or other areas of the computer, correcting bugs or including new features. If you stop in the middle of this process, the files that were being edited are now incomplete and unable to perform their assigned task. Sometimes the computer can resume or reverse and update, and other times it can get caught in a limbo state or boot loop, unable to boot into Windows or access your user profile. If your user profile is corrupted, you will get an error message that the profile can’t be loaded or perhaps that the password is incorrect, even if you’re positive that you typed it correctly. This is where a technician can rebuild a corrupt profile or reinstall your operating system.

An unexpected shutdown can be caused by power outages, brown outs, depleted laptop battery or removed power cord, accidentally hitting the power button, or the computer encountering some kind of problem that forces itself to shut down. Because of the issues that can occur with an improper shut down, the only time to utilize the hard shut down (holding the power button until it turns off), is if the computer totally freezes or otherwise becomes unusable. Sometimes turning a computer off and on again will allow it to reset itself.

If it’s just one particular program that freezes, first try pressing CTRL + ALT + DEL to bring up the Task Manager. From within the Manager, select the program that is unresponsive, and click “End task” to force quit it. If Task Manager or power options do not come up, that’s when you may need to use a hard shut down.

A few tips in summary:

Make sure you are shutting down your computer properly when you want to turn it off. If a laptop wants to complete an update, make sure it is plugged in so that you don’t risk the battery running out and shutting down unexpectedly mid-update. If possible, before making any major changes to your system (such as an upgrade), be sure to do a backup of any important data, just in case the changes don’t go as planned. Regular backups are always recommended.

If you find your computer no longer works after an unexpected shutdown or incomplete update, PC Ninja can diagnose and correct the problem.

"Our office uses electronic medical records, so it was essential to have a secure and reliable network to protect patient information. PC Ninja reviewed and understood my needs and then set up my entire network and phone system in a short period of time. I will definitely use PC Ninja again."