What is an SSD and should I have one in my computer? 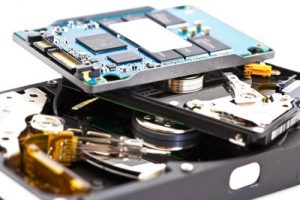 SSD stands for Solid State Drive. It is the current technology this has begun to replace Hard Disk Drives (HDD). The HDD or SSD is the hardware component in a computer that stores data. The operating system (usually Windows on PCs and MacOS on Apple computers) is installed on the drive. It allows the computer to boot into an interface that the user can navigate. When you create a document and save it, it is saved to your storage drive. You can also save files to external devices, such as a flash drive or external hard drive. Without a storage drive, you wouldn’t be able to save any files or even boot into the operating system.

What’s the difference between an SSD and an HDD?

One of the main differences is that an SSD has no moving parts inside it. The drive is entirely digital and saves information to microchips, like flash drives. An HDD spins, with a mechanical arm writing and rewriting information on the drive platter in different sectors. Because SSDs do not have moving parts, they are far less likely to fail or experience damage due to movement and wear and tear. They are not infallible, but they tend to be more reliable than hard disk drives and have a longer life. However, both types of drives are susceptible to sudden power loss, electric surges, and high levels of magnetism.

SSDs function at higher speeds than HDDs because they can randomly access data at any time, while the read/write arm of the HDD must reach the right sector of the rotating platter. This makes SSDs the better choice for the user concerned with a fast boot up and quick performance, especially if you’re dealing with photo and video editing and rendering or other high-processing tasks. However, those types of projects tend to be large files that would quickly eat up drive space.

Should I get a computer with an SSD or an HDD?

This is going to depend primarily on your budget. Though the prices for SSDs are slowly falling, you can still get more gigabytes of storage for your buck on an HDD than an SSD. The most common size of HDD in desktops and laptops had been 500 gigabytes (GB). But 1 terabyte (TB) drives (which are twice the storage capacity), are now becoming more prevalent and nearly equal in price. SSDs remain quite a bit pricier, even for smaller sizes, such as the most common 256GB drive.

For desktops or laptops that can support multiple hard drives, users may consider installing the operating system and programs on an SSD for speed in startup and program operation, and utilize a second HDD with greater storage capacity for their project files. To get an idea of how much various hard drives sizes hold in data, you can view this chart.

There is no question that SSDs will replace HDDs as they become more widely produced and lower in price. For now, if you need a lot of storage space and can operate at slightly slower speeds, an HDD may still make sense for you, especially if you’re on a budget. For those concerned about speed of the system and applications who can either do with lower storage capacity or afford the pricey larger-sized drives, an SSD is the way to go.

You can read more about the differences between SSDs and HDDS here: http://www.storagereview.com/ssd_vs_hdd