Backup (your data) before you wish you had! 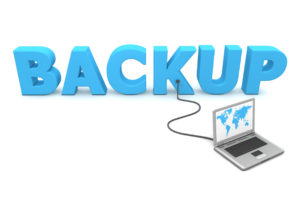 It’s human nature not to worry (about completing something) when things are going smoothly. This is especially the case when it comes your computer and doing data backups. You meant to do it, but never did get around to running that backup. Then the unthinkable happens – your hard drive fails, the computer is stolen, or an accident damaged the computer (e.g. you dropped it or spilled something on it). In situations like that, without a backup, you may have just lost your priceless photos, emails, documents, financials, and more.

Computer backups are like insurance policies. It seems that you never really need it but you certainly want it to be insured if something happens. It’s a safeguard and offers peace of mind. It may also save your job and a lot of heartache in the future. Imagine the stress were you to prepare for an important interview, board meeting, or pitch to a client, but unexpectedly your hard drive fails and you’ve lost months of work you completed on your presentation. How about the situation when you’ve just found out that you lost years’ worth of digital photographs of your children, pets, or a loved one?

With computers (whether you own a PC or a Mac), you will need to assume that:

If you aren’t convinced and before you think “this will never happen to me,” let’s look at the statistics:

To increase the chance of recovering lost, deleted, or corrupted computer data, we subscribe to the 3-2-1 rule of backups. This rule of backups is recommended by US-Computer Emergency Readiness Team (US-Cert) and the National Institute of Standards and Technology (NIST).

The 3-2-1 rule of backups means: keep 3 copies of backups—2 backups onsite (on different media) and 1 offsite. Why do you need that many backups? Simply put, backups fail too.

There are several ways to back up your information. Some of the more common options include:

There isn’t a one-size-fits all solution for backups, as it depends on budget, size, and requirements of your company. It can also differ if you are a residential vs. commercial business user. The best solution will be well thought out based on your current and future needs, rather than a system that is used by a friend, acquaintance, or another company. What others are using may not necessarily align with what you need and be based on different budgetary requirements. We have often seen small and medium-sized businesses spending excessive amounts on server systems with features that they do not and would not use. On the flip side, we have seen companies that have used inadequate systems, being ill-advised on what they thought would be a good (cheaper) solution at the time. We have often recommended a combination of solutions that satisfy the 3-2-1 rule rather than a specific set up. PC Ninja is glad to discuss back up options to give you peace of mind that your valuable data will be accessible if (or when) your hard drive fails.