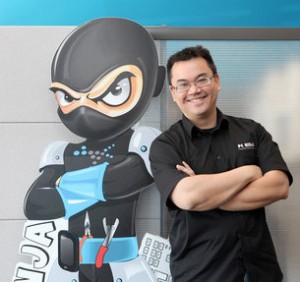 PC Ninja is owned and operated by Melvin Foo, a Chinese Malaysian with a broad and exceptional background. He was born in Singapore, and schooled there in elementary. He then went to high school in England (same high school as the future queen of England!), and attended university in Wales and England. After a short stint working in Australia, Melvin came to the USA to work for an engineering company in Cleveland, Ohio. Upon marrying a lovely woman from Berks County, Melvin moved back to her hometown of Reading in 2008, where he plans to happily remain with his wife and sons, saving the day for the computer owners in Berks as the PC Ninja. Melvin became a proud citizen of the United States in early 2015.

The source of knowledge is experience.
-Albert Einstein

Melvin’s interest in computers commenced at the age of eight, when, in the early ’80s, he and his sister received their first computer, which he began to tinker with right away. From that moment on, he knew he wanted to work with computers and has done so ever since. Before focusing on sales and repairs as PC Ninja, Melvin was as an engineer for a large corporation working with computers and computer networking.

With a Bachelor’s in Engineering and Master’s in Business, industry-standard computer certifications, and a wealth of experience, he has built a service company based on good, old-fashioned customer service and solid credentials.

A ninja represents someone with humility, discipline, and focus, who strives to be an expert in a particular area and to be the best they can possibly be. Ninja are born to lead and serve at the same time, and to do so well. Those traits serve as our mission, to help and to serve you, the customer, to the best of our ability and knowledge, helping you solve all computer problems and fulfill computer needs.